When surgical vision correction came out many, many years ago, I immediately wanted it. But I was young and it was expensive, and a bit new and scary. But I’ve always liked hiking and outdoor things, and when I was younger, I even enjoyed camping, and always thought how much better it would be if I could participate in those activities without having to worry about my contacts. Of course, I also had a pair of glasses, which I wore at nights and sometimes if I was just hanging out at home. But I’m not one of those people who looks good in glasses, and the weight of them was often enough to give me a headache.

So a few weeks ago, I had Lasik performed. What made me go through with it, after contemplating it for so long? I don’t even know. At one point, a few years ago, when I started writing, I thought a good reward for me when I sold books would be the surgery. (Yes, I thought of surgery as a reward.) Anyway, I realized that I had made more in profits than the cost of the surgery, so I consulted a few friends who had the procedure, and went in to find out what it was all about.

One of my complaints was that when I was knitting and/or reading while doing something else that require far vision (watching television or making sure my kids weren’t dying), I would have to lift up my glasses to see the up-close activity. Obviously with surgical correction, I would no longer be able to do this. But they gave me a trial of unequal contact lens to test. In this test, my right eye (which is my dominant eye), would be fully corrected for distance, and my left eye would be under-corrected for near vision.

I tried this out for a week, and it seemed successful, so I went through with the surgery, only a day after my birthday. The day of the surgery was rough. I am a little freaked out about anything having to do with my eye, which I then realized was probably why I put off the surgery for so long. And the place forgot to call my husband to pick me up after, so I sat around for two hours, completely blind and confused as to why he wasn’t there yet. 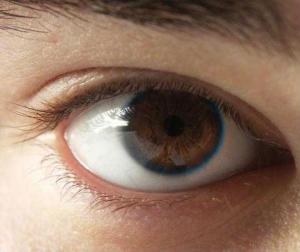 Not my actual eye!

That night, I had to keep on these kind of awful plastic shields over my eyes that caused beads of condensation so dense that I could barely see a thing until the next morning. And then of course, there was the endless stream of drops, which will continue for about a month. But I can see! I keep waking up at night thinking I forgot to take out my contacts, but no, I won’t need them again! It’s only been a little while, but I have to say it was definitely worth it, and I probably should have just done it sooner!

So what’s with the title of this post, me calling this a minimalist adventure? Well, there aren’t many people who wouldn’t like to minimalize the amount of things they have to do to get ready in the morning, and I’ve found another way to cut down that list. Plus, I got to donate my glasses, and give away my contact lens solution!