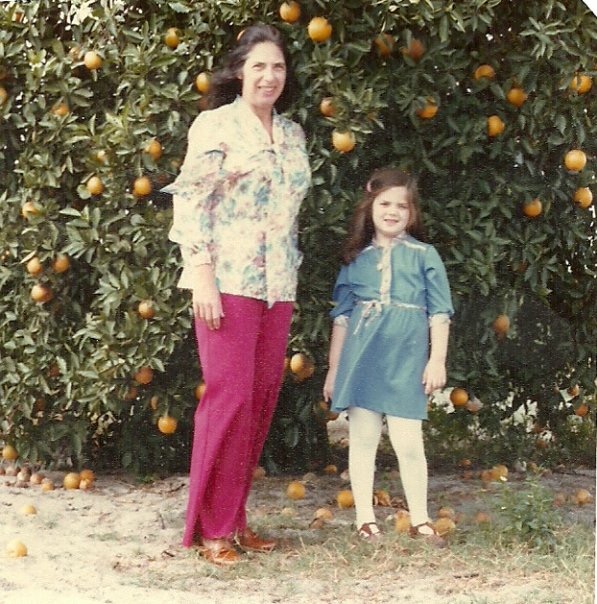 My constant struggle to declutter and minimize is not something I do just because I think it will make my life easier and my environment more pleasing–I actually enjoy getting rid of things. Whenever something, especially something big that I’ve had for a particularly long time, leaves the house, I feel happy and lighter.

When did this begin? I think I may have been influenced by my mother. When I was a child, one of her favorite games to play with me was to give me a garbage bag and set five minutes on a timer. I then had to run around the house and see how much I could fill the bag in the time allowed. There was no tangible reward at the completion of this game–just the pleasure of throwing stuff away. 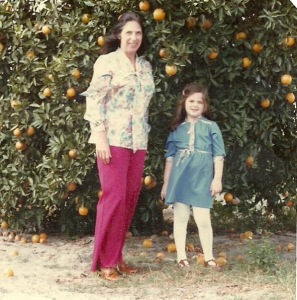 My mom and me in the late 70s. Probably in Florida, as evidenced by the plethora of oranges.

My mother is an odd case, because although she grew up with very little in the way of material things, she also didn’t want many material things. My father, who also had very little while growing up, was somewhat the opposite. If he saw something that he could get for free or very cheaply, he would get it just in case he would ever need it.

When my parents retired, they moved to their summer house in upstate New York. While my mother kept the house very neat by doing a weekly deep clean and actively discarding non-desirable items, the garage and barn were filled with all sorts of items by my father. Eventually, he rented one other garage, and then a second. There was also a one-bedroom apartment attached to the house, which was filled.

My mother passed away first, and eventually the house was also filled with my father’s near-worthless items. He then moved to Florida, and planned to sell the house, but neglected to bring any of these things with him. Instead, he got some people to take away all the stuff so that he could stop renting the garages and put the house up for sale. (Think of a more redneck 1-800-JUNK type of company.)

Unfortunately, I was in the process of moving from the house to an apartment in New York City with my then-boyfriend, and they also took all of my belongings. These included off-season clothing, decorative items, memorabilia, and most things I thought were too breakable to take in the moving van we had hired few few days before. Also, my cat.

When I went back to get my stuff, I fortunately found both my cat and the urn containing my mom’s ashes, but everything else was cleared out. I felt depressed and violated, but relieved that the two things that were the most important to me were still there.

Having a strange fascination with hoarding, I know that these types of events are generally ones in which a hoarding inclination is triggered. I was nervous about this going in, but fortunately I still have no hoarding tendencies. At least in this case, I seem to be taking after my mom.