For the October Sustainability Swap, I focused on cat litter! This is particularly appropriate as our cat, Oz, joined the family two years ago, on October 13, 2016 to be exact. I have lived with at least one cat for most of my life, and I have to admit that I’ve never really thought about cat litter before.

When I was young, my parents used whatever litter they used, and I was not involved. When I was 18 and I moved out with my first cat that I adopted myself, my parents actually still bought all my household items, including cat litter. The next time I adopted a cat, I was a full adult, and continued to buy the same litter, just out of habit. (Fresh Step, if you are interested.)

It’s only now that I’ve started doing these sustainability swaps that I have thought about switching cat litters. Why switch? Clumping clay litter doesn’t biodegrade in landfills, and, from what I understand, is not sustainably sourced.

What I started using instead is Feline Pine. This litter is completely biodegradable (it’s pine!) and also sustainably sourced. You can read about that on their website, which is linked above. I have used this litter for a bit, and there is a learning curve to cleaning the litter box. In fact, I had to watch a YouTube video before I could figure it out! But, it doesn’t smell at all, and Oz seems to have taken to it! This is the video I watched: see someone cleaning a litter box!

Just a little over a year ago, one of my best friends in the world, my cat Pyewacket, passed away. I wrote a post about how terrific he was right after his passing, and you can read that here.

A few friends and family members suggested that I get another cat immediately. I didn’t do that. I wanted a cat, but the only cat I wanted was my Pye back. It took many months, almost a full year, before I stopped feeling that way. I went to a few shelters, one with just my older son and one with just my husband. Neither shelter had cats that “were good with kids.” I contacted another shelter by phone, and they said they didn’t like to place cats in homes with kids, but maybe she had a friend who had a cat that might like kids.

At this point, I pause to say WTF? Are we just as a default going to say that cats and kids do not get along? When I was about four, my parents got a cat for the first time. I grew up with cats. Also dogs. Also ferrets. Also rabbits. I don’t think I ever had an altercation with a single one of them.

Anyway…. Finally we were put in touch with someone who had a young cat in a foster situation. After many phone calls, emails, interviews, and home visits, we were granted a cat. And while I am not saying this vetting process in unnecessary, what I will say is if you want a kid, there are way fewer hoops to jump through to make that happen.

So, without further adieu, I present Oz.

This photo is from his first night in the house, last Friday. He is in my kids’ bedroom. When they go to sleep (8:30-9 most nights), he also goes to sleep. He does not want to come out until morning. That first night, he slept on the floor, but every night after, he has slept in bed with my younger son. He usually likes to rest his head or a paw somewhere on him. So, take that, people who think cats and kids should not mix.

I am still getting used to the reality of having a cat again. A part of me still wants Pye back, but there are so many cats out there who do need a home, and it feels good to be able to provide for one of them. 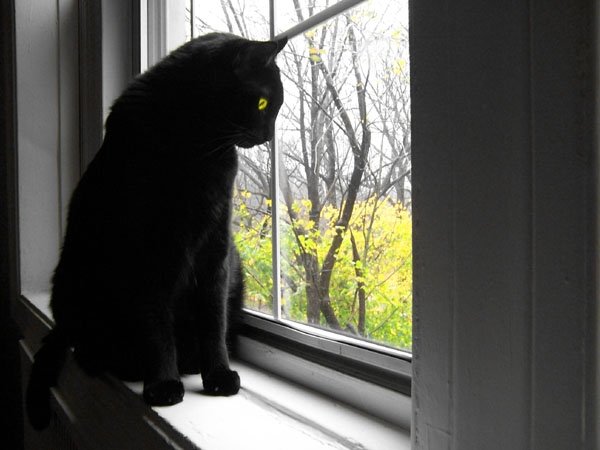 My favorite photo of Pye, in the window of our last apartment, keeping watch for squirrels.

Some 14 years ago, my life was very different than it is now. My mother had just died and I had quit my job and moved to upstate New York to be with my possibly suicidal father. Right after my mom died, my old cat also died. We were still so numb from her death that we hardly even registered the fact that Gypsy, the cat we had since my thirteenth birthday, had passed. We needed a break, and took a week-long camping trip.

When we returned to our house, my basement apartment was filled with mouse droppings, and all the food I had left in my cabinets was chewed through. A few days later, I decided that adopting a new cat was necessary. My previous cat, Gypsy, had been a very small black and white girl. In the name of not getting another cat that reminded me of her, I decided to look for a larger, male cat. Inspired by the old movie, Bell, Book, and Candle, I also decided I wanted a very talkative cat, and to name him Pyewacket.

As soon as I walked into the cat room of the upstate New York Humane Society, one cat reached a paw out of his cage and tapped me on the arm. I read the card on his cage, and saw that he was a nine-month-old male domestic short hair. His name at the shelter was Bagera, after the panther in the Jungle Book. I took his out of his cage and immediately knew I would adopt him. He purred very loudly when I pet him, and complained very loudly when I stopped. While I liked his original name of Bagheera, I was aware of my propensity for shorting names, so I decided I would rather have a cat named Pye than one named Bag.
The day I brought Pyewacket home (not that day, as there was a waiting period for adoption), I happened to be having a party. Now, I knew how my old cat acted when I was having a party, which is to say she ran and hid from the minute the doorbell rang. Pye was the polar opposite of my previous cat, and came running to the door as soon as someone knocked. During the party, he ran from person to person, greeting everyone with loud yowls. But that night, and almost every night for the next 14 years, he came to my bedroom around midnight, and slept next to my head on the pillow. 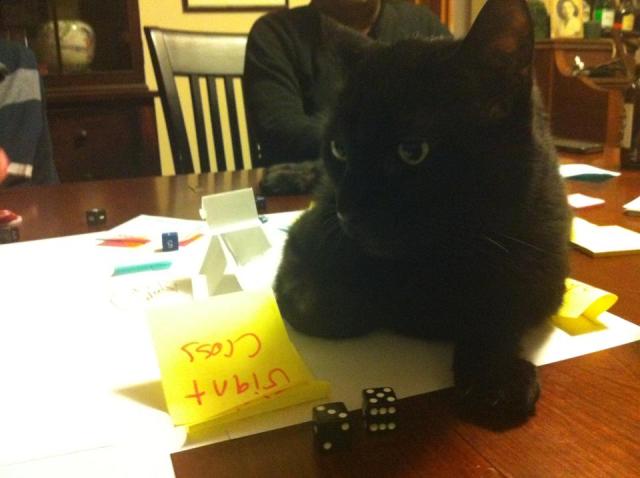 Gaming was a favorite hobby of Pye’s!
In 14 years, I have moved four times, gotten married, and had two children. Pye was with me through all of this. He interjected himself into conversations when guests came over, made himself a part of every family celebration, comforted me when I was sick or sad, and played with my children and was graciously accepting of their overzealous hugs and kisses. We found out eight years ago that Pye had a congenital heart condition (cardiomegaly, literally an enlarged heart) and probably wouldn’t live as long as most cats. He was on multiple medications from then on. He occasionally lost some hair as a side effect of the drugs, but his stellar personality never changed.
Although I’ve had many pets before, none have come close to Pyewacket. His heart was big, but his personality was even bigger. I will remember and miss him forever.

Pye loved Samir from the minute we brought him home. 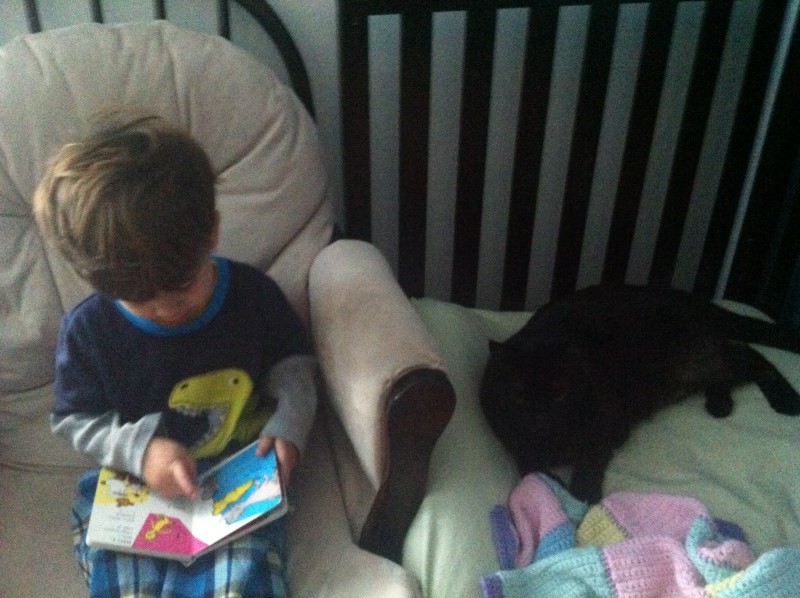 Growing up in an urban area (Queens, NY), I was able to walk to many different stores that were within a few blocks of my house. There were no bookstores, but there was a library. Sadly, most of my family members were not very into reading, so I was not taken to the library until I noticed it one day on the way to the grocery store, and specifically requested of my grandmother that we go there.

I still remember the feeling of amazement when I realized I was able to not only read any book I wanted, but I could also borrow them and take them home. After that, I visited the library at least once a week. Today, I am fortunately enough to live within three blocks of my local library. Unfortunately, due to budget cuts, it’s not open on the weekends, but I do take my sons to visit whenever I’m home with them during the week.

Last week, we stopped in and my older son immediately picked out two books for me to read them. He’s only four, and thus has very limited reading ability as of yet. But I do love reading to them, and hope they grow up to love books at least in part due to my efforts. Anyway, we got through the first one okay, but then I realized the second one was quite long, and my ten-month-old had already fallen asleep in his stroller, and my older one’s lids were fluttering.

Of course, it’s also very important to read to your cats.
Suddenly, the idea came to me that we could borrow these books! I usually don’t borrow books because I’m afraid I’ll loose them and never return them, but due to my recent experiments into mimimalism, my house is (slightly) less cluttered, so I decided it was worth the risk. My son was so excited at getting to borrow a book, and it brought me back to my childhood library experience. I realize I’m very lucky to live where I do, and hopefully the library will be around for my sons to enjoy as they grow up.