Last week I wrote about my trials and tribulations of getting the cement in my backyard taken away. That actually took place last fall. After the contractor finished moving away most of the broken cement, he said we would wait to do the next part until the spring.

While this was ongoing, I decided to test my existing soil. A few people warned me that it may contain heavy metals or other dangerous things, and I had to do that before I planted anything in it we would possibly eat. I didn’t have a solid plan as to what to plant yet, but I wanted to include the possibility that I would be gardening edible plants.

After several annoying and possibly hilarious attempts to test using kits I bought online, I discovered the NYC Urban Soils Institute. You mail them a soil sample, and for a reasonable fee, they test it for you and email you the results. The soil from my yard came back as lacking in biologic material but otherwise fine. I was so happy to hear it!

Through the Soils Institute helpful website, I found that the best way to amend my soil was by adding organic matter. I would add to need topsoil, because the level was so far below the cement, but the winter is not the time to do that. Since it was a mild winter, I started just adding organic material by burying my organic garbage. It sounds odd, but I was already bringing scraps once a week to be composted. This was even easier! Just dig a hole and bury them!

A few people asked about animals digging it up, but we are vegetarians, so it was only fruit and vegetable scraps. I live in Queens, so the only animals about are stray cats, who wouldn’t want my scraps, and raccoons, who can easily find tastier stuff in garbage cans. I have never had a problem! And never will, since it is now spring and I stopped doing this because things are growing in the yard. More on this next week. 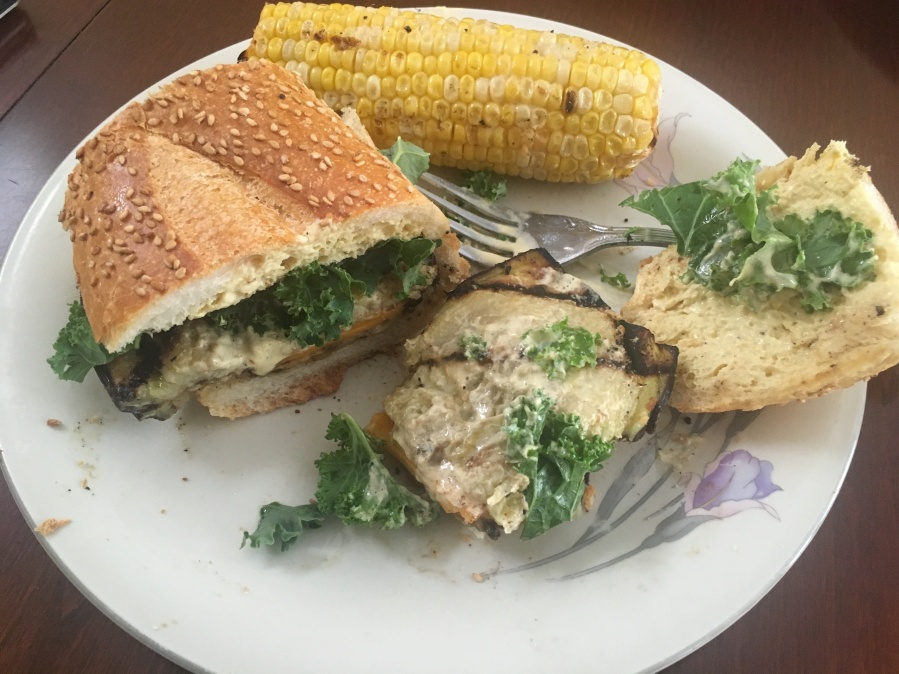 Week 4 of Meat-Free May included a lot of eating out, and, to come clean, one of those times I ate fish. I found out my favorite fish restaurant was closing, and I was planning to go there for my birthday in June. So I went this week. I feel like I failed in that I ate fish, be succeeded in that I didn’t let in get me into a spiral of continuing to eat meat.

One day, I forgot to bring my lunch to work, and was depressed at the thought of eating in my office cafeteria, so I wandered out to MTHR Vegan. I originally wanted a sandwich, but changed my mind and got this BBQ tempeh bowl. Fortunately/unfortunately the restaurant is only a few blocks from where I work, so I’ll be back.

We also went back to the Queens Night Market, and managed to eat only vegetarian things, and none of the things we ate the last time. We had a guava and cheese empanada, spicy fried masala noodles, samosas, mozzarella arepa, radish puffs, and some fried cinnamon cake. 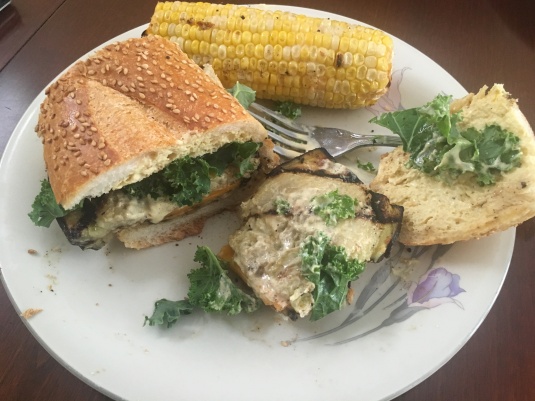 And it is/was Memorial Day weekend, so we had BBQ! I marinated some eggplant in olive oil, tahini sauce, garlic, and lemon juice, and had it on fresh Italian bread with some kale and a cashew cream sauce (that I made for something else, but didn’t have time to make yet, so I’ll make it tomorrow). Also, grilled corn, which is always a favorite! 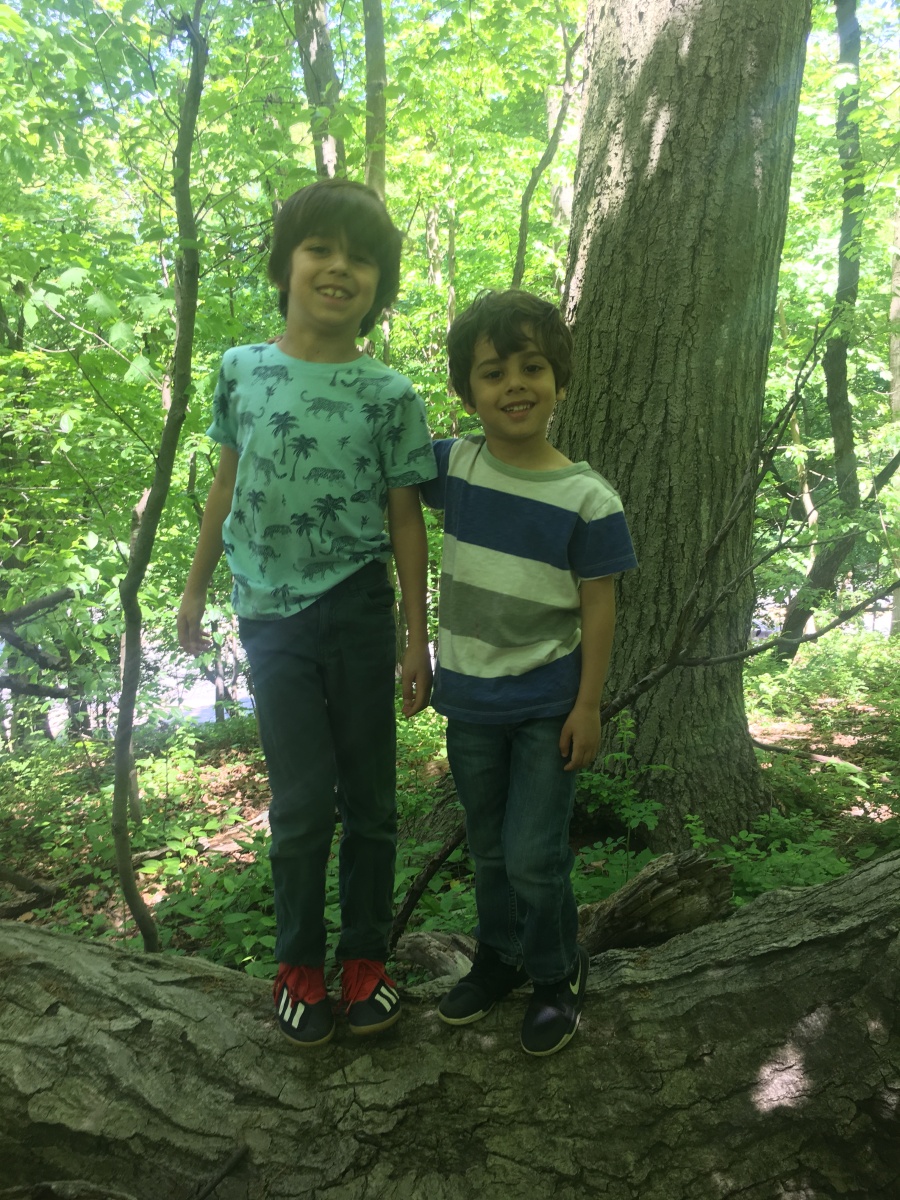 We are into the third week of Meat-Free May! I am still feeling good and have not eaten meat nor wanted to eat meat. I do have a few health updates that may or may not be related. Because I was at the doctor’s this morning for my annual, I know I lost two pounds. Also my blood pressure, which has never been a concern of mine, was 118/75, so now it is even less of a concern (previously had been 120/80). At some point this week, I remembered that in the past when I was vegetarian or vegan for years-long stretches, I became deficient in vitamin B12, so I did start taking that as a precaution.

This week I ate out a lot, but forgot to take photos every single time! We went hiking, biking, went to a show at my son’s school, and I went to a concert and spent a lot of time hanging out with horses. One night I ate Chinese food out at a fancy place. We had an assortment of things, but my favorite was Shao Kao Fu, which is seitan with mushrooms and peanuts. I also ate Thai food out with my family, and had Massaman Curry with tofu and vegetables. And finally I had Italian food out with my family, and I had eggplant rollatini.

I’m trying to remember what I ate this week at home and mostly failing. There were a ton of my favorite salad: kale, avocado, cucumber, tahini, and hemp seeds. I made orange seitan with broccoli for the family one day. And I finally got to try jackfruit, which I’ve been curious about for some time. It came four cakes to a pack, so I made them all, and ate two on successive days for lunch. I liked the jackfruit, even though I’ve not into crabcakes that much. I would definitely be interested to try jackfruit in a different format! 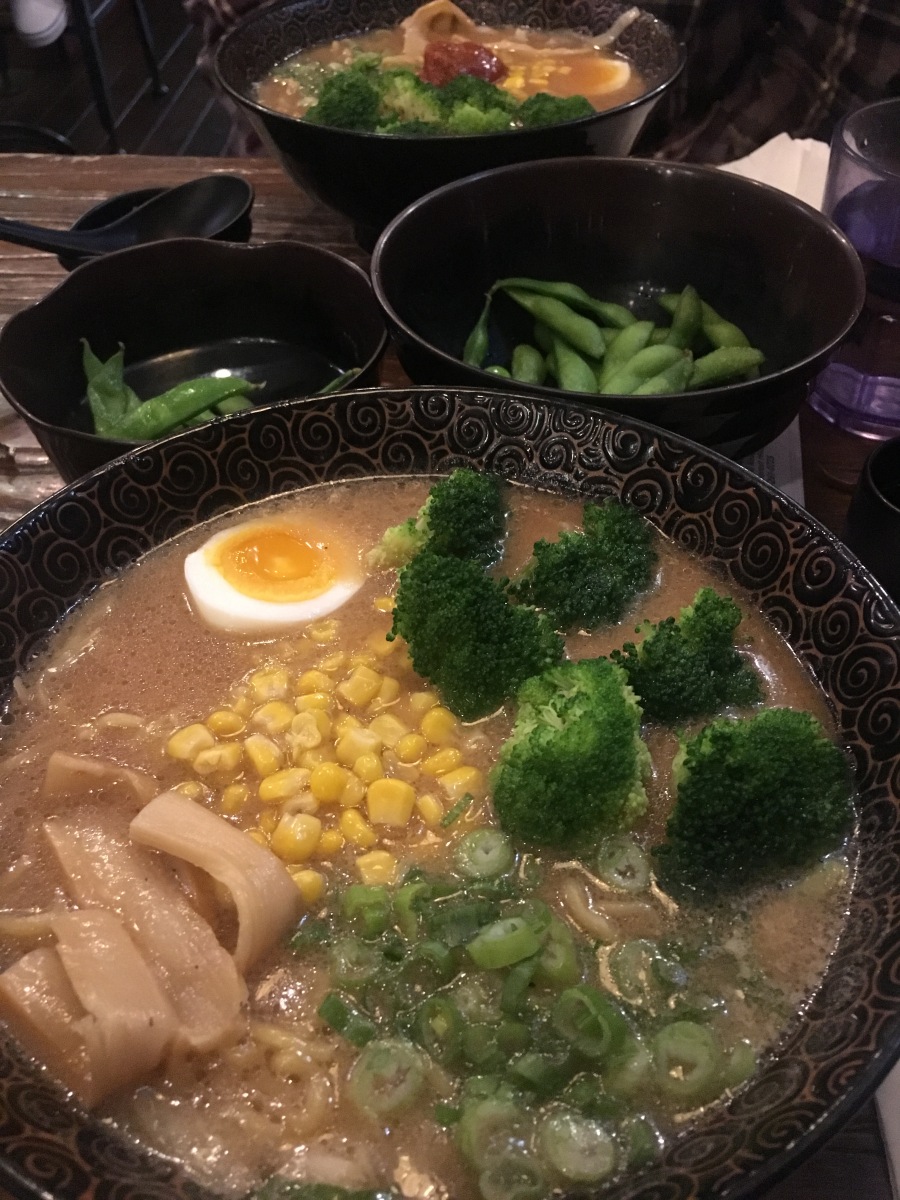 We actually ate out a bit more than usual, the highlight of which for me was ramen! I love ramen and was concerned our local joint did have a section for “vegetable ramen,” but it did not specify that the ramen was vegetarian. I know their regular ramen is made from animal bones, so I asked the waitress, and was informed that my favorite, the miso ramen, is vegetarian!

The two other times we ate out were at vegan restaurants, so we were able to pick from the menu without asking/worrying. While I love this about eating at vegan places, I think it’s also important to eat at omnivore restaurants as a vegetarian, so they will know that yes, people like vegetables!

For meals at home, we had pasta one night, pizzas another night, and one day, something that I previously thought was really hard to make–falafel. I baked it rather that fried it, mostly because that amount of frying seemed like it would be more danger than I wanted to deal with! Thus, it was a little dryer (and I’m sure way healthier) than I’m used to. Also, this mix was a bit spicier than I usually expect falafel to be. Nonetheless, thumbs up! I ate this with kale salad for lunch the remainder of days of the week.

For dinner, we had the falafel balls with pita, kale, cucumbers, avocado, and TJ’s tahini sauce. The kids ate their falafel with…cheese and ketchup. At least they ate it! 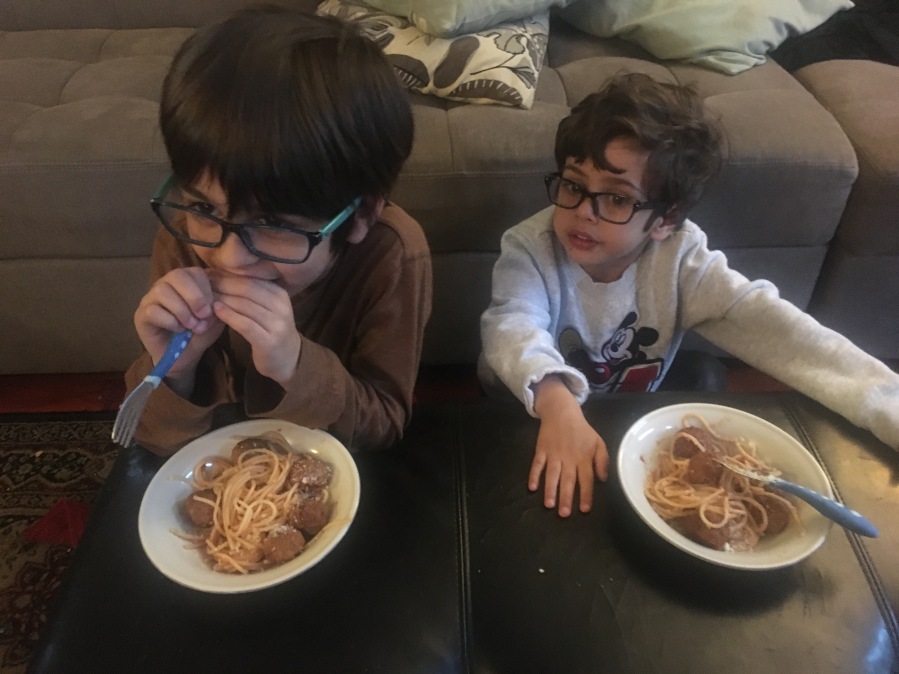 It hasn’t been a full week yet, but since I didn’t take notes and am liable to forget, I thought I would check-in how I did for week 1 of Meat-Free May. In short, it went well! Meaning, of course, I didn’t eat any meat, and I felt fine and wasn’t craving it.

As I mentioned in a previous post, I generally eat the same two things for breakfast and lunch every day: cereal with almond milk and a banana and kale salad and a peanut butter sandwich. My only weekday deviation was an egg salad with carrots and chips one day, as I was at the DMV all morning and didn’t want to bring my lunch with my.

One night for dinner we had spaghetti and meatballs. Having two young kids, this is a staple at our house. They were hesitant when I told them the meatballs might taste differently because they were not meat, but they not only ate everything I gave them, but asked for seconds!

Another meal I put together at home was ready-made Indian stuff, also from Trader Joe’s. It was chana masala (chickpeas with tomato and spices), palak paneer (cheese cubes with spinach puree), and garlic naan (flatbread). This was too much for my older son, so I also made him frozen fish fingers. My younger son is a much more adventurous eater and proclaimed it “spicy, but not too spicy.”

Over the weekend, as predicted, I ate out twice. For lunch Saturday, we had pizza. For dinner Saturday, we went to a large food truck festival called the Queens Night Market. I was walking around and eating too much to take photos, but we mostly all shared everything. We had corn on the cob, a rice cake with eggplant and tomato puree on top, a corn cake with tofu and vegetables cooked into it, a spiralized potato with cheddar seasoning, and fried ice cream. I have to admit that I was nervous there would be no vegetarian options there, but there were plenty. I plan to go back many times this season!

This month, I am doing another month-long project: Meat-Free May! As you might guess, this means I will attempt to not eat any meat for the month of May. Other people are doing it too, and have written about why you would do it here. The New York Times also has a great article about how what we eat impacts the planet. And yes, there is also a quiz!

I have a long and twisted diet history, but for the most part, I don’t like eating meat. I don’t care for the flavor and texture of meat as a whole. For a not insignificant portion of my life, I have been vegetarian and sometimes vegan. I am also a minimalist with food choices. What I mean is that the more food choices there are, the more stressed I feel. (I can’t even tell you how stressed I get just looking at a buffet!) I have tried to deal with this by eating the same thing for breakfast and lunch every day. Breakfast is cereal with almond milk and a banana. Lunch is kale salad with oil and vinegar and a peanut butter and jelly sandwich.

For dinner I will usually eat out about two nights a week, have take-out one night, and cook the rest. Dinner is varied, but usually kid-friendly. If I were single with no kids, I would probably eat the same two things for dinner every other night, like I did through most of my 20s. (If you are interested, these two meals were a flatbread with garlic and vegetables on it, and pasta with oil, garlic, and greens. Now I would probably add a rice and beans to the mix, you know, because I’m so adult.)

For this month, to keep myself accountable, I’ll write how I did every Monday. I assume the weekends will be the problem, as I tend to be out and about with the kids. I also assume I will be eating at least one slice of pizza and one Impossible Burger a week, which is okay by me. Let’s see what happens!