Don’t you hate it when you’re looking for a simple recipe and you have to read a whole story just to get to the recipe? Me too!

This dish is meat-free, gluten-free, dairy-free, and soy-free. What is even in it??? See below.

Cook the onion and garlic for a few minutes in a frying pan on medium heat. Then add the potatoes. Salt and pepper to taste. When almost done, add the tomato and crumble up and add the Pumfu. Add as much nutritional yeast as you like (I like a lot!). When it all looks done, add the spinach and cook for about two minutes more.

This was so good! We had it as brunch, but I’d be happy to eat it for any meal.

We ordered curry one night, and ate everything except a few tablespoons of curry sauce and some rice and one naan. I saved those items and the next day made something that was a bit like curry. I made this in an Instapot, but you could just use a large pot on the stove.

Mix all these ingredients:

I served it with the leftover rice and naan. It was so good! I’ll definitely do this again next time, and of course you can use whatever veggies are in the fridge.

Today is the last day of May, thus the last day of Meat-Free May! All of my meals in May have been vegetarian, save one fish meal, which I ate because my favorite fish restaurant is closing and I don’t know if I’ll get a chance to go in June before it does. I realize that I don’t miss meat at all, and if possible, I think I might like myself a little better as a vegetarian.

So, with that, I’ve been thinking about extending this meat-free month into June, July, and maybe beyond. For now, I’ll see how June goes. I have the intention of eating mostly vegetarian. However, I do want to clean out my freezer, and I know I have some chicken in there that I didn’t want to eat in May, so I will probably eat that in June. I am also traveling a lot in June and the beginning of July, so it will be more challenging than if I were to just be staying in vegetarian-friendly NYC. Either way, I’ll report back at the end of June.

This week, I didn’t eat out that much. The one place we did go to was an Ethiopian place in the Village called Meskerem. I had the vegetarian combo, which is a little of everything. I wish I could name all the items on the plate. I know the upper left was cabbage, and next to that is green beans and carrots. Everything else was sort of pasty and maybe either lentil or chick peas or both. And the injera bread it’s all served on is a perfect utensil as well.

We also ate a lot at home. As I said, I’ve been trying to finish food that’s in my freezer. I do this about every three months and I think it’s a good practice to avoid food waste. We ate a lentil stew that I made about four months ago. It was really good, and I wish I had a recipe, but it was mostly just red lentils, kale, carrots, garlic, and garam masala cooked in vegetable broth. I’ve also been cooking more in general. In fact, I followed an actual recipe! That recipe was tofu and mushroom stroganoff.

It seems complicated, probably because of the soaking of cashews. But don’t let that put you off–they practically soak themselves! Some changes I made to the recipe were substituting elbows for fusilli pasta (I don’t know why I hate fusilli, but I do). I left out the wine because I had already drunk all the available wine. And I didn’t add the parsley garnish. It was yummy, and my kids didn’t realize it wasn’t real cheese in the sauce.

Week 4 of Meat-Free May included a lot of eating out, and, to come clean, one of those times I ate fish. I found out my favorite fish restaurant was closing, and I was planning to go there for my birthday in June. So I went this week. I feel like I failed in that I ate fish, be succeeded in that I didn’t let in get me into a spiral of continuing to eat meat.

One day, I forgot to bring my lunch to work, and was depressed at the thought of eating in my office cafeteria, so I wandered out to MTHR Vegan. I originally wanted a sandwich, but changed my mind and got this BBQ tempeh bowl. Fortunately/unfortunately the restaurant is only a few blocks from where I work, so I’ll be back.

We also went back to the Queens Night Market, and managed to eat only vegetarian things, and none of the things we ate the last time. We had a guava and cheese empanada, spicy fried masala noodles, samosas, mozzarella arepa, radish puffs, and some fried cinnamon cake.

And it is/was Memorial Day weekend, so we had BBQ! I marinated some eggplant in olive oil, tahini sauce, garlic, and lemon juice, and had it on fresh Italian bread with some kale and a cashew cream sauce (that I made for something else, but didn’t have time to make yet, so I’ll make it tomorrow). Also, grilled corn, which is always a favorite!

Over the past few weeks, I’ve decided to try my hand at baking. One of the first things I’ve ever tried to bake are these berry muffins, which have a very high ratio of berries to dough, and are ever so slightly tart. The brown sugar on top can be omitted but it is very attractive and adds a bit of crunch.

Directions
Preheat oven to 400 degrees.
Combine flour, white sugar, salt, and baking powder in a large bowl. In a smaller bowl, mix milk, egg, and vegetable oil. Mix and and to flour mixture, blending to a good consistency. Fold in berries. Pour into lined muffin tin and sprinkle with brown sugar. Bake for about 23 minutes. 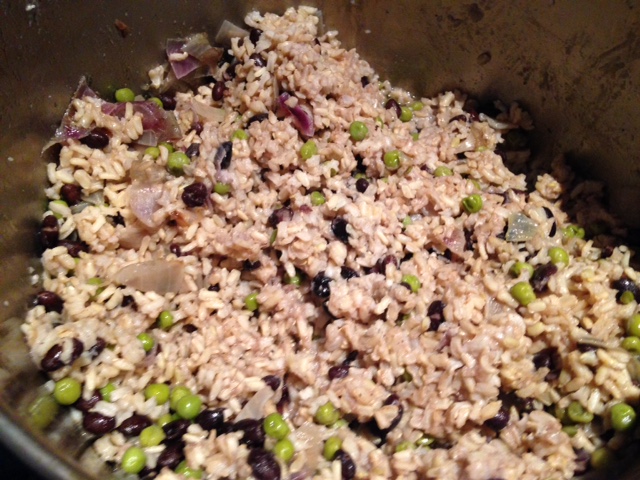 It’s no secret that I hate cooking. I also hate being in the kitchen in general. So why do I have kitchen appliances that I can’t immediately name and 37 knifes? Why do I have “good plates”? One thing that has made it a little easier for me to be in the kitchen is not having so many appliances and cookware that I will never use. I think I got rid of about four frying pans and six pots of various sizes. At best, each of these was used once a year. What I have left is a very large pot, a small pot, and a frying pan. Here is where I did go out and buy something–a cast iron frying pan. I use it at least two or three times a week, and it seems to be true that things taste better when they are cooked in it. 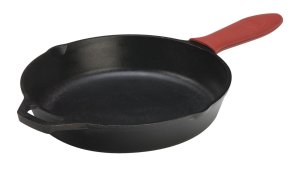 The pan I bought, which is super heavy. I think the brand name is Lodge.

I also thought about minimizing cooking without sacrificing money or healthiness. I’ve been reading about those industrious people who cook all their food for the week on one specific day a week. I’m the type of person who could eat the same thing several days of the week, and not be bothered by it, so this idea appealed to me on that merit. But I wanted to start small, because the task was so daunting to me. After looking online for the kinds of things that fared well, I went with rice and beans. It took about an hour to cook up, but I made a ton, and we can eat this every day (with other foods added for variety) with hopefully minimal effort.

Cook the chopped onion in the olive oil and add garlic paste (or chopped garlic). Add water and rice and bring to a boil. Add beans, peas, and soup mix. Cook on simmer for 45 minutes or until water is gone and rice is cooked. The finished product was pretty tasty, and I think pretty healthy too! It’s easy to heat and eat with a salad, an egg, or whatever else you have, because it does seem to go with almost anything. Of course it can always be eaten by itself if you’re in a rush and nothing is around.

Here is a not-very-appetizing photo, but I’m not a food blogger per se, so I think it’s good enough. And by the way, this was all made and is currently stored in the one large pot I kept, so they is very little clean up.

If you have any very easy, moderately healthy, make-ahead recipes, I would love to hear them!